One of the objectives of the Smart5Grid platform is to provide a common place for application developers and consumers within the market of energy grid applications. Towards this goal, Smart5Grid is developing a platform for facilitating the development, verification, and validation of Network Applications (NetApps). These tested NetApps will be made available in a repository for consumers to use.

This platform and the infrastructure upon which NetApps are deployed constitutes the overall Smart5Grid reference architecture, which is logically divided into three main layers: 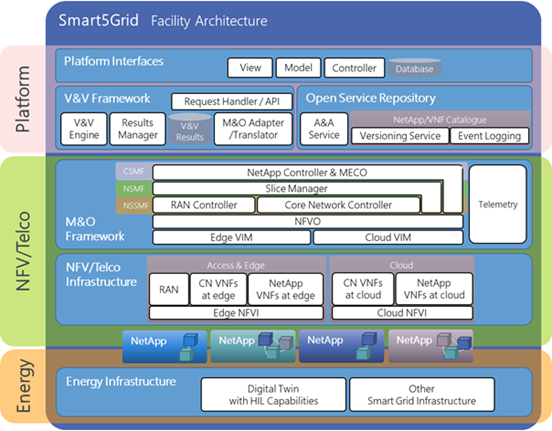 The platform layer is the uppermost part of the architecture, meaning that it is the point of entry of users to the Smart5Grid facility and where it opens for 3 rd parties. This point of entry is provided by the User Interface which, in essence, consists of a web application that manages the authorisation and authentication of users and provides access to the services offered by the exposed APIs of the other two components of this layer, namely, the OSR and the V&V framework.

The OSR enables developers to register their NetApps and virtual network functions (VNFs), making them available for consumers to download and deploy over their infrastructures.
Developers can also benefit from VNFs authored by other developers and combine them with their own applications forming new NetApps.

Before the NetApps and VNFs are stored in the OSR, they must undergo a testing process that provides guarantees on said NetApps to the consumers. This testing is realized by another critical component of Smart5Grid, the V&V framework. The V&V framework provides the platform with a tool that enables automated testing of NetApps in two senses:

This layer contains the required computing and networking systems that enable the deployment of NetApps for its validation by the V&V framework. It is subdivided in two parts: the Management and Orchestration (M&O) framework, and the NFV/Multiaccess Edge Computing (MEC)/Telco Infrastructure itself.

The M&O framework is responsible of managing the end-to-end lifecycle of a NetApp deployment. It also provides services to cover all aspects of the complete lifecycle, including onboarding, instantiation, monitoring, scaling, and termination.

The Energy Infrastructure layer is composed of a heterogeneous set of devices from across the generation, transmission, distribution, and consumption network segments, as well as any other auxiliary devices that may be required for operating and maintaining the grid, such as cameras or sensors. These devices are the ultimate subject of the function performed by the NetApps. Through the Telco network, devices are able to reach the NFV infrastructure where the NetApp components are executed and connect to their offered services.

Furthermore, Smart5Grid integrates a Real-Time Hardware-In-the Loop (RT-HIL) testing infrastructure which enables the setup of a digital twin of a power system and integrates it
with real devices. This infrastructure is pivotal in the pre-pilot testing and validation phase of the software solutions developed.